skip to main | skip to sidebar

Return of my evil twin! 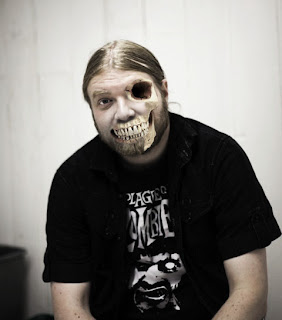 So last September I told the story of my evil twin and how he first appeared in Norwich, followed me to Chelmsford, moved to Cambodia for a while and then resurfaced in Brighton. You can read the whole story and about that last sighting here. Since then my life has been fairly evil twin free. Not one reported sighting.

So last night I went to a Brighton Filmmakers Coalition event at Madame Geisha (which was a fantastic evening - felt a bit more like an art installation than a film screening but in a good way). I'm making my way to the bar to get a drink and happen to push my way through the crowd at the same time as someone else. And the someone else looks across and smiles. And I nod, smile back, presuming it's a general 'busy in here isn't it?' smile.

Then he does a rather dramatic double-take. At this point I have a bad feeling that I know what's coming next. I presume the over-the-top double-take was due to the fact that the friendly smile didn't get the predicted response, that I was supposed to say 'Oh, hi Jeff Random, I haven't seen you for ages, not since that thing in the thingy place...'

But I don't. Because I have never seen Jeff Random before in my life.

I turn away, thinking maybe he's drunk, or looking at someone else behind me or something. I concentrate on catching the attention of someone behind the bar. Every now and again I chance a glance to my left and see that he is still there, still smiling at me.

Then he says something to the effect of 'How's it going?'

I am somewhat relieved. He's just being friendly, looking for a pleasant chat at the bar while we wait for the overworked barstaff to get around to us. It's a room full of local filmmaking types so it's safe to assume he is on the lookout for a potential networking opportunity. I realise I'm just being paranoid so I drop the confused act and play along.

Then he confirms my worst fears and says 'We were in a workshop together.'

The kind of evening it is, I assume he means some kind of creative arty workshop, and not the manufacturing type. I try to think if I've been in any workshops recently. I haven't really, not since university. He can't be thinking that long ago, surely. Maybe I was in one by mistake? Like I was in a pub having a drink with friends and it turned out there was some kind of workshop in progress only we were all too drunk to notice? But he's talking like I participated. And then I wonder if it's some kind of joke, like that theatre group in New York who pick random strangers in bars and pretend they are all his friends and all there for his birthday party as a kind of street-theatre/practical joke/social experiment thing. But no one else seems to be in on this, and Jeff Random seems very sincere. He really believes I was in this workshop.

'Yeah, it was you, I'm sure,' he replies. And he tells me what the workshop is - I can't remember exactly, but it was some kind of physical theatre thing. The kind of thing I am very unlikely to have attended, but he's positive I was there. Jeff Random looks at me like he knows exactly who I am. He even looks pleased to see me, like we had an awesome time in that workshop and he just wants to reminisce.

And then I start to think about something - does my evil twin also have a beard? Last time he was spotted I didn't have a beard. Now I do, and Jeff Random recognises me. Is my evil twin mirroring my appearence? And there's another, more worrying factor here. Technically, in the history of evil twins, only the evil one has facial hair - a precedent set by Evil Michael Knight in Knightrider: 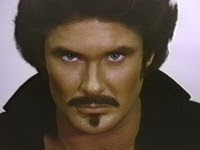 Surely we can't both have beards? But maybe he's not an 'evil' twin. Maybe he's just a long lost twin. Or a clone? Or a version of me from the future? Yes, time travel, that makes sense! That's why I never see him, because it will cause a tear in the space-time thingy, or we will turn into big blobs of CGI like Ron Silver in Timecop.

Meanwhile Jeff Random is not ready to give up on me just yet...

'Don't you remember?' he asks.

I'm not sure where I was going with that, but the fact that I would consider turning up to a physical theatre workshop while intoxicated seems to be the thing that finally convinces him I'm not who he thinks I am.

He does another double-take, then apologies. Even offers to buy me a drink to make up for the awkwardness. I introduce myself properly and then someone I actually do know pushes to the bar next to me. I say my goodbyes and chat to my real friend.

But the last thing Jeff Random says stays with me. He looked me in the eye and with a deadly serious tone said, 'You've got a doppelganger, mate.'

This is the episode of Hammer House of Horror I was telling you about...very apt for your "evil twin" story!

Awesome! I'll check that out!

Chris Regan
I'm a writer with a day-job which means I don't usually get down to writing until around ten in the evening, hence the blog title. My first feature as a writer, Ten Dead Men, was released on DVD in 2009. I'm currently working on a series of short horror films following the adventures of a witch called Jenny Ringo. There are currently three films in the series - Jenny Ringo and the Monkey's Paw, Jenny Ringo and the Cabaret from Hell and Jenny Ringo and the Infinite Spellbook. You can find out more at www.jennyringo.com. I live in Worthing, which is a bit like Innsmouth.