skip to main | skip to sidebar

Why you should give my friend money to make a film... 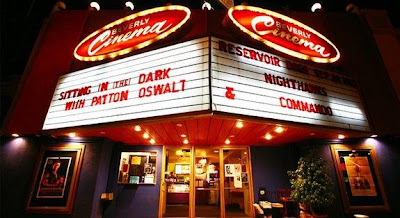 My friend Julia has less than 2 days left to raise the rest of the $75,000 she needs to make her documentary about the New Beverly Cinema. Yes, I could have (and really should have) written something about this earlier but maybe the sense of urgency will actually convince some of you to donate.

You can find all the details HERE and listen to Julia explain her reasons for wanting to make the film and why it's important.

Here are my reasons:

1) The New Beverly is quite possibly the best cinema I've ever been to and I genuinely want to know more about it. It's hard to relate to a love of old cinemas these days as multiplexes are ugly and made of evil, but there was a time when cinemas just used to show films. That was all they were there for. They weren't about selling you overpriced food, they weren't about providing some kind of heightened 'experience', they weren't about anything other than showing you the film you've chosen to watch in the best possible way they could. That's the kind of cinema the New Beverly is, and I'm all in favour of celebrating that. Plus I know there are some awesome stories to be told about that place, which leads me onto my next point...

2) It's going to be a really great film. Julia already has some awesome interviews lined up and there are bound to be some interesting contributions from the cinema's regulars. At the same time it's not just a film about a building in LA that shows films, it's about the end of something important; something we may not realise we're going to miss until it's too late.

3) If you are a filmmaker or if you have any creative aspirations and you are even vaguely interested in this then you have no excuse, because one day you'll be crowd funding a project too and you'll be writing a blog like this asking for people with a vague interest in what you're doing to give you money. Crowd-funding is only going to work if genuinely interesting projects like this one are successful.

4) It may seem like the target is a little high, but take a look at Amanda Palmer's latest project. I love Amanda Palmer, but $800,000? I'm not sure what my point was going to be (probably that generating $800,000 through crowd funding seems to take the piss a bit) but it does make Julia's target seem a little less over-ambitious. Plus she's well over halfway - she can totally do this if enough people get on board.

Okay, there are only like 44 hours left now, go give her money!
Posted by Chris Regan at 23:38

Chris Regan
I'm a writer with a day-job which means I don't usually get down to writing until around ten in the evening, hence the blog title. My first feature as a writer, Ten Dead Men, was released on DVD in 2009. I'm currently working on a series of short horror films following the adventures of a witch called Jenny Ringo. There are currently three films in the series - Jenny Ringo and the Monkey's Paw, Jenny Ringo and the Cabaret from Hell and Jenny Ringo and the Infinite Spellbook. You can find out more at www.jennyringo.com. I live in Worthing, which is a bit like Innsmouth.